York Community Energy takes a trip upriver to a site with a long history.

At the York Community Energy AGM this June we heard all about the Linton Hydropower project – a new 280kW Archimedes screw turbine at the Linton Lock weir. The scheme promised not only clean power but also an overhaul of the antique fish ladder and facilities for canoeists. We thought it sounded worth a closer look, so we asked if we might have a tour of the site for YCE members and supporters. 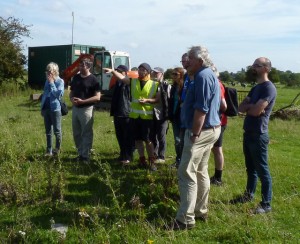 On Sunday September 11th – in the middle of Community Energy Fortnight – fifteen people converged on the site for a tour. Our guide was Adrian Clayton, a York-based employee of MannPower Consulting, who are one of the UK’s leading specialists in Archimedes screw hydropower and the company behind the Linton project. What none of us had realised was that as well as a promising future, the site also has a long history.

The Linton Lock weir is a listed structure, built in 1768-9 as part of efforts called for in a 1767 Act of Parliament to improve access to York, Boroughbridge and Ripon by cargo barge. Until that time, the river at York had been tidal, meaning barges were grounded at low tides. If the tides were bad, it could take several days to bring a cargo from the Humber up to York. The weirs at Naburn and Linton effectively set a constant level of water through the city, greatly improving the throughput of traded goods.

The history of the weir was researched by Linton Hydro whilst putting together the plans. They found archive documents relating to the tender for its construction, including a letter from one of the unsuccessful companies warning the Linton Lock Commissioners that the company behind the successful tender would produce substandard work. And they may have been right: the weir was constructed almost straight across the river, at right angles to the flow, rather than at the diagonal angle you might expect. This made the weir a lot shorter (and hence cheaper) but at the expense of increased turbulence and greater water level variability upstream. This may be behind the need for extensive repairs already in 1783. To partly compensate for the narrow weir, a variable height system was added in which boards counterweighted with lumps of concrete would pivot to allow more water over the weir during high flows. 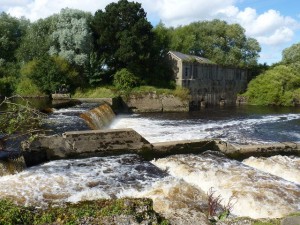 The wonder of electricity

The opportunity for generating electricity on the site was not lost on the landowners. In the 19th century electricity was the latest technological luxury for the landed gentry, and hydropower schemes appeared all over the country, providing lighting for manor houses long before the creation of a national grid.

In the 1920s a more concerted effort was made to harness the power of the weir. The crumbling remains of the large turbine house from this era still stands on what is now an island off the north bank of the Ouse, between the lock and the main weir. Electricity from this was sent down to power the thriving factories and mills of York, then a rapidly growing industrial city. Only a few years later, the national grid was created, and the following decades saw governmental efforts to centralise electricity generation via the creation of the CEGB. Independent hydropower schemes were subject to heavy taxation as the grid took on its current, highly centralised form, built around monolithic coal-fired power stations. The Linton hydropower scheme became unprofitable and was abandoned in the 1960s.

With no-one maintaining the site, the pivoting weir boards system deteriorated to the point where local farmers became annoyed by the fluctuating river levels. It seems that they took matters into their own hands with various attempts to sabotage the weir. An attack under the cover of darkness in April 1974 “improved” the water flow so much that the marina drained, leaving boats stranded in the low water levels. 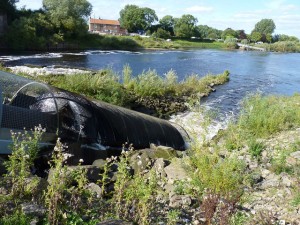 The existing 100kW Archimedes screw with Linton Marina in the background

The next hydropower to be generated at the site was the current 100kW Archimedes screw turbine installed in 2012 by Mann Hydropower, and it was this that we saw on our trip. The new project – financed by a £2m share issue which closed in June 2016, having easily made its target – will give this turbine a bigger sibling: the new turbine will be the largest Archimedes screw in the UK when it comes online next year.

The turbine has been performing consistently to expectation since its installation – save for during flood periods. During the massive Boxing Day floods the entire weir was submerged. The screw itself can be submerged without problems. Its generator was specified to deal with submersion, but – much like at the Foss flood barrier – this did not stand up to the extreme test of these floods. Given the likelihood of more frequent extreme floods in future, as our climate worsens under human pressure, the new system will be both higher and better sealed against these floods. The generator is, however, a readily replaceable and pretty standard part, the same technology as you would find in diesel generators worldwide.

Under normal conditions, 6 cumecs (cubic metres per second) of water pass through the 4-bladed screw, which rotates at a constant 24 rpm. It needs little maintenance; under normal operation the system functions autonomously, controlled by a computer running in the nearby control room (a sealed shipping container). This has a pressure sensor which gauges river level, and can control the sluice gate in front of the turbine as well as the rotation speed. It is connected to the internet via a fixed wireless link to a phone line at Linton Marina, and can be monitored and controlled remotely also.

By the middle of the 19th century the impact of weirs on fish stocks was well understood, and fish ladders were often being added to allow fish such as salmon and trout to climb upstream to spawn. These divert a small amount of water down through a series of pools, through which the fish can manage to swim to rejoin the river above the weir. As our understanding of the behaviour and sensory world of fish has improved, so have our ideas about how a fish ladder should work. But at the beginning it was a battle enough merely to get them built. The first one was built cheaply out of wood, and was washed away. Another, built from stone, was constructed in the 1886 but almost entirely ineffectual. The current structure dates from 1894 and is a protected historic structure, despite still not being a terribly effective fish ladder, and despite a deliberate 20th century hole in it intended as an (unsuccessful) improvement. It has deteriorated further over the years, with far too much water now entering it. The approach of the new scheme will be to carry out limited restoration to the ladder, restoring it to its 1923 condition, but to basically give it up as a bad job and construct a new fish ladder to the south of the two turbines.

This new fish ladder will also serve as a canoeists path up over the weir, and is part of a range of enhancements to the river for canoeists. Apparently the bolder canoeists like to jump the weir at Linton; so the perpendicular construction at least benefits someone. Less bold canoeists will now also be able to traverse the weir, and a series of slaloms will be installed along the route. 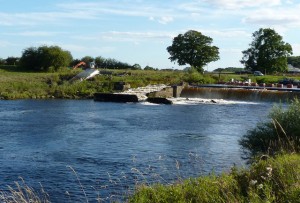 View of Linton Hydro site and the weir from the marina

Go see for yourself!

The easiest and most pleasant way to see the existing turbine, and watch the works progress, is from the North bank of the Ouse at Linton Marina. There’s a small bar and restaurant at the Lock which is a beautiful place to spend a few hours on a sunny day. Bring some binoculars as the turbine is on the opposite bank, which is not publicly accessible and will be a building site for much of the next year. It’s also worth bringing binoculars in case you spot the kingfisher that buzzed past us as we picnicked at the water’s edge, or the heron who kept an eye on us from the island.

The Linton Lock scheme may not be community energy in the strictest sense, but we welcome its arrival on our waterway!