York Council backed a motion last week which includes a pledge to:

Work on a cross-party basis to ensure that policies are adopted which increase recycling, reduce carbon emissions, expand the use of renewable power generation, and support community energy projects

The motion reiterated a pledge made by the Liberal Democrats before the May elections to make York the ‘Greenest City in the North’. Read the full text of the motion here (point iii). Councillor Andrew Waller, the Executive Member for the Environment introduced the motion – you can watch his speech introducing the motion, in which he recognised the work done by York Community Energy and pledged to work with us. All good stuff to hear!

The motion was passed with a Green Party amendment requiring the Council to draw up plans to divest Council pension funds from fossil fuels.

It also mandated the Council to lobby DECC not to cut support for renewables. The outcry against the Government’s wrecking-ball approach to renewable power (in stark contrast to its steamrollering approach to fracking and blank-cheque approach to nuclear) has not abated, with news that two of our larger clean energy firms have gone bust. York has its own fair share of the national renewable installation and consultancy sector – Solarwall, Core Solar, Origin Energy et al – a fact that won’t have escaped our local MPs’ attention.

We were invited to meet the Conservative Party MP for York Outer, Julian Sturdy – who also has some concerns regarding the cliff-edge over which support for renewables is being pushed (not his words). He couldn’t make the “Powering the City” conference we organised last month, so it was good to be able to give him a precis as well as lobby on the national picture.

In the interests of balance we should say that York Central MP Rachael Maskell did manage to attend the conference, as did Councillors from the Green, Labour and Lib Dem groups. So, we’re very pleased that we had had interest and/or support from all the political parties currently represented in York!

Continuing the positive theme, our day-trip to Hockerton was showered in sunshine! 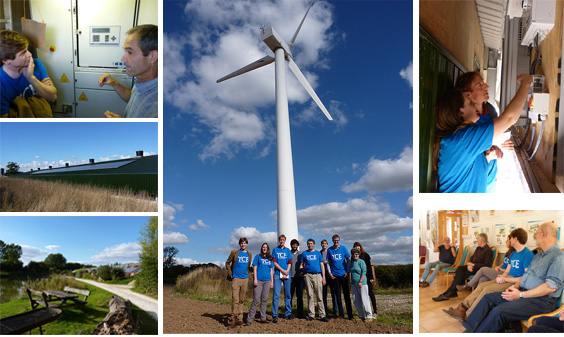 It was an excellent day for demonstrating their community-owned 50kWp solar array, mounted on an agricultural building, though less so for the 225kW wind turbine which generates most of their energy. Sustainable Hockerton was one of the direct inspirations for York Community Energy, so it was a great pleasure to tour their sites and learn how they had developed the projects. Director Simon Tilley explained how the organisation had grown out of a housing project and now produced more energy than the village consumed. You can see more pictures from our visit on our flickr group and read more about Sustainable Hockerton on their website.

Here in York we continue our work in reaching out to community buildings onto whose roofs we might arrange to install a similar community-owned solar array to the one we saw in Hockerton. If you’ve got any suggestions or advice, or would like to help, we’d love to hear from you. We’re holding an open planning meeting at 7:30pm on Thursday October 15th in the back room at the Minster Inn on Marygate. Or just use our contact page.