There are scores of inspiring stories of community energy projects across the country. But the one recently completed by the Edinburgh Community Solar Co-operative (ECSC) is probably the nearest to what we’d like to achieve here in York.

At our AGM last year we heard about the project from the chair of ECSC, Dr Richard Dixon. At that time, their contractors were just getting underway with the massive project to install PV solar panels on 24 council-owned buildings across the city. It is the largest community-owned solar project in Scotland, with an installed capacity of 1.4MW – roughly equivalent to the solar panels you might get on three hundred separate houses. On Thursday June 22nd we took a trip up the East Coast Main Line to have a look for ourselves at what they’d managed to achieve.

Our host for the trip was Jim Lee, the Project Officer for Energy4All in Scotland. Energy4All has a great story of its own, arising from the desire of the pioneering Baywind Energy Co-op to spread their knowledge, experience and financial model far and wide. Jim, like his predecessor Phil Phare, fulfils the role of fixer and back-office administrator for the Edinburgh co-op. On the day, he was our tour guide between the various PV host sites, and meetings with the people behind the project. 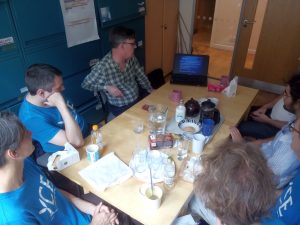 Our initial briefing from Jim Lee

Friends of the Earth Scotland very kindly leant us the use of their meeting room for the day to use as a hub, and after a short briefing here we set out.

The 24 sites were whittled down from a long-list of 100 supplied by the Council. Any with slate roofs, in conservation areas, or due for refurbishment or demolition were removed from the list, which ended up with 25 plus three in reserve. The final list included schools, community centres and leisure centres owned by the Council.

As the project progressed and further complications arose, four more sites turned out to be unsuitable, meaning that all three of the sites in reserve had to be brought in, and in the end only 24 installations actually went ahead.

Perhaps unsurprisingly, these sites were spread across Greater Edinburgh, outside of the more historic centre. So we got to see a lot of the city on our bus tour.

The first calling point was Wardie Primary School, in the Trinity district to the north of the city. The flat roof here hosts a 30kWp array, completed just under a year ago in July 2016. To our surprise the panels here were entirely freestanding, not fixed to the flat felted roof. The benefits of this are obvious: there is no impact on the fabric of the roof, and installation and maintenance is much easier. However there are some drawbacks also: the panels must lie fairly low to stay out of the wind, and that means a less than optimal angle. And there must be security implications also. But it must have represented a significant cost saving, and it was more than we expected to be able to roam around amongst the panels! 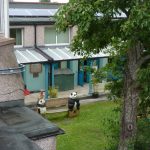 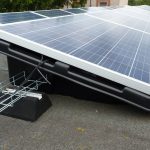 The PV panels on their freestanding plastic mounts 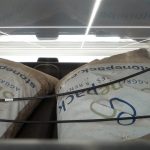 The secret at the heart of freestanding solar panels 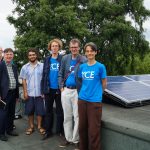 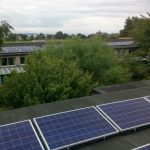 The view across the Wardie array to the Firth of Forth

Next we passed by Oaklands Special School – a much larger and more modern building with panels attached more conventionally to a raised-seam roof. A significant amount of the massive 125kWp array is actually on a flat roof here, pointing straight up without any framing.

Our final site was Canal View Primary School in Wester Hailes area of Edinburgh overlooking the Union Canal, a pleasant green corridor through the area thanks to a good sprucing up that it received as a millennium project. Canal View hosts 92kWp of panels on five different arrays across the roofs,  freestanding panels on flat roofed areas and mounted on pitched roofs. We all had a good shuftie at the inverters and metering points too, to the bemusement of the school janitor. 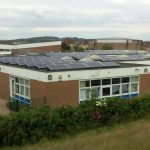 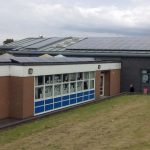 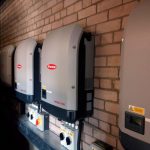 The school has five inverters and two metering points

All the arrays were installed by Emtec Energy between June and September 2016 – and proudly completed on-budget and ahead of schedule.

The fact that the solar panels were installed pointing every which way, at totally suboptimal angles, was a surprise to us. In part this is a reflection of the relative costs of installation against the value of the energy: energy is cheap, labour is expensive. It also reflects the levels of government support available at that time – with feed in tariffs slashed, today we would want to squeeze as much generation as possible out of every panel. This might sound like good economic sense, but having all panels in the ‘optimal’ position would mean that every panel in the UK would be peaking at solar noon – not so good for evenness of supply.

The joy of co-operation

The background to the success of the ECSC was the political coalition between the SNP and Labour that ran the Edinburgh City Council from 2012-17. Part of the Labour manifesto was for Edinburgh to become a ‘Co-operative Capital’, with particular backing coming from the then council leader Cllr Andrew Burns. Community Energy was something that held an appeal to both groups, as well as many of the opposition councillors – not least to help the Council meet their ambitious target of cutting carbon emissions by 42% between 2005 and 2020. The coalition meant that neither of the two main parties were outside of the tent, directing their ire inwards. Just as with everyone else: when politicians co-operate, they can achieve far more.

By the time this coalition took power, Edinburgh Community Energy had already been going in some form for more than two years. Like us, it emerged out of a few years pursuing a wind power project that in the end came to nothing.

It may be worth a mention that Edinburgh Community Solar Co-operative isn’t, by the strictest of definitions sometimes demanded by the FCA, a co-operative. It’s actually a Community Benefit Society, which allows it to pursue an agenda to benefit society more widely than simply the interests of its members, as co-operatives are required to do.

It would be great to be able to replicate their project exactly, but the situation is very different here in York in 2017. In the good old days of 2015 it was possible to put a scheme together based on selling electricity to the grid at wholesale prices. Since the axing of government support in 2015 this has become extremely difficult. The best prospect at the moment is to build a project around an end user that can agree to purchase energy at a price between the wholesale price (typically 3-4p per unit) and the retail price (typically 10-12p per unit) – this is the line we’re pursuing with our Solar City Farm project. Schools are not an ideal prospect for this, since they close for the summer months – precisely when generation is at its highest. And right now, schools in York face an uncertain future in the face of compulsory academisation, whereas in Scotland there is far more centralised control of schools – in some cases the decision to install a community-owned solar array was taken before the school knew anything of the project!

Every so often we hear someone saying “of course, solar panels are pointless this far north”. The presence – and scale – of the Edinburgh community solar project is a great counter to this. The fact is that the price of solar panels has tumbled and the efficiency increased so far that there are very few habitable places where solar is not viable. But you can tell that ECSC are fed up with explaining this by the page on their website dedicated to doing so!

We’d like to thank everyone who came to speak to us, showed us around their school or otherwise helped put this trip together: Richard Dixon, Cllr Chas Booth, Johanna Carrie, the caretakers of Wardie and Canal View Primary Schools, Friends of the Earth Scotland, and especially Jim Lee. We look forward to being able to pay the favour forward to other groups when we have our solar arrays installed! 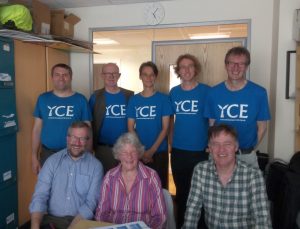