2019 AGM report: Healing our homes in an age of heating 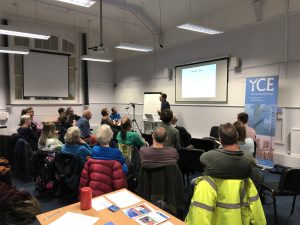 Facing up to the challenge of making 25 million UK homes ready for the low carbon world we need is a huge challenge. With government and the housebuilding industry having pretty much deserted the fight, community energy organisations are stepping up to try to find a way forward. For our AGM this year we heard from two different organisations pioneering ways to make our houses not just environmentally-friendly but more comfortable to live in and cheaper to run.

Before the public talks could get underway there was the formal AGM business. Our vice-chair Kit Bennett presented the accounts, which members can review in the password-protected members’ area of the website. And then we were pleased to welcome a new chair, Tom de Simone, formerly our Social Media Officer. Our prior chair, Ivana Jakubková took over the mantle of Treasurer from Tomás Sherwen, who we thank for having done a sterling job for several years (not least in dealing repeatedly with the Co-operative Bank). We welcomed Jess Cole as a new Social Media Officer and extended extra thanks and congratulations to Elizabeth Crossley, our outgoing Secretary of three years’ service, standing down to the lower-intensity role of Membership Secretary as she will soon be taking on the role of new mother. We wish her, and Tomás, all the best.

Our Year in review – and a shapely experiment!

Outgoing chair Ivana Jakubková next presented a brief review of YCE’s year: our two Energy Cafés, our first “housewarming party”, and the talks, stalls and home assessments that took place. The year also saw the end of the Feed-in-Tariff regime which did so much to support the growth of renewable energy in the UK and the community energy movement. But that isn’t to say that community- owned renewable generation is now impossible. We are continuing to meet organisations interested in hosting rooftop community- owned PV, with the higher profile of the climate crisis making more organisations think about what they can do to contribute.

In a brief interlude before the main feature, incoming Secretary (and former Chair) Richard Lane gave a brief presentation about a project he is working on with Carbon Co-op called PowerShaper. This is an open source DSR (Demand Side Response) project – a funded trial to create a system in which individual households in a community can volunteer a few suitable appliances to be controlled collectively in order to help balance the local electricity grid. This sort of system has existed on a larger scale in commercial and industrial premises for some time, and is a crucial tool in the box to allow the grid to manage the fluctuating power generation levels of renewable energy. Building our capacity to respond in this way as communities could make a significant contribution to the transition to the renewable electricity system of the future. Households in York can participate in the trial. For more information see https://carbon.coop/portfolio/power-shaper/.

Retrofit: from rigmarole to routine? 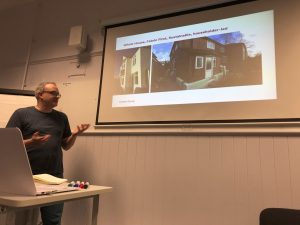 Our main speakers both spoke to the pressing need to take action on the poor standard of most UK housing. Jonathan Atkinson of Carbon Co-op spelt out the problem and the need for urgent action for us, with 2.5 million in fuel poverty and an annual cost to the NHS of £1.4bn due to poor housing. And yet of the UK’s 27 million houses, the numbers that have undergone a deep retrofit to make them ready for a carbon-constrained future is estimated to be only in the hundreds. Others have had some insulation installed or other energy saving measures installed but not necessarily to a high enough standard. Carbon Co-op run the pioneering People-Powered Retrofit project, which takes a fabric-first, householder-led approach, recognising that every house is different. Even if a house may have been one of an estate of near-identical clones when first built, the different history and roles of each house since means that a one-size-fits-all approach often ends in failure and dissatisfaction. Their system is co-ordinated with an online assessment, feeding into a progress monitoring system that helps the householder through the process of evaluating interventions. This is all kicked off with data from an initial assessment from a professional, costing the house £500.

The People Powered Retrofit project puts the bill for such bespoke deep retrofit at around £40,000 per property, which highlights a key problem of equity: if it is left to householders, those in fuel poverty will least be able to afford it. Without a robust response as a nation or communities, decarbonisation will further exacerbate economic differences. Jonathan highlighted how community energy groups are ideally placed to act as trusted intermediaries between householders and contractors, and work on a larger scale across social groups. It is not an easy role and takes a long time to build relationships with careful contractors taking an interest in energy issues. But it is vital and urgent work, and it is exactly what YCE is also working towards. 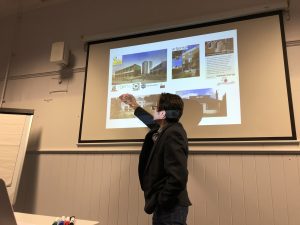 Our second speaker was Eric Parks, lead architect with Buckrose Ecological Architects. He has extensive experience of the needs of different types of housing for retrofit. He pointed out that as a country we have been carrying out deep insulation retrofits for over 20 years, but it still is not considered a ‘normal’ service in the building trade. Despite this, there is an enormous body of accumulated experience and wisdom, and that it’s always possible to ask “WAGOLL”: What’s A Good One Look Like? Ericdemonstrated the importance of post-retrofit monitoring by sharing some of his ‘gotchas’ from past works: things like unanticipated cold patches caused by thermal bridges at the bases of walls, soil pipes and window fittings. He also recommended doing retrofit to meet a building standard, to benefit from the wisdom and experience accumulated around it. Whilst Passivhaus may be the gold-standard, it is not always the best choice for every house and there are plenty of other standards out there to choose from.

The AGM finished with a lively question and answer session for all speakers. If you’d like to watch a recording of the whole meeting, please follow this link to the video.

We go into 2020 with a full plate: a rooftop PV scheme, meetings with Councillors newly focussed on the climate crisis, a reinvigorated network of community energy and zero carbon groups, and a long list of members interested in house assessments or “housewarming party” retrofit works. And, like everyone, an ever clearer idea of the urgency of making progress in this challenge. We wish a great seasonal break to all our members – see you in the New Year!